Kennesaw State takes the football field this week!…well kind of…

Kennesaw State head football coach, Brian Bohannon will feast his eyes on hundreds of young men as he hosts the first football event at Fifth-Third Bank Stadium.  A 7-on-7 passing tournament will be held July 10-July 12 as some of the brightest high school talent from around the state take part. In an interview with the Marietta Daily Journal, Coach Bohannon said, “We’re going to have nine different teams each day and 27  teams total. Each team will get to play six games and really get to test themselves against some quality opponents.

“This camp was a huge goal of ours,” Bohannon said. “We wanted to get as many of these athletes to campus as we could. We can show them what KSU has to offer.

“With 27 teams, and each of them has about 20 kids per team, that’s a lot of kids. They’ll be playing 7-on-7 games on the stadium field and it will be a unique situation for them. For us, it’s a chance to get them on campus and show off KSU and let them be around our coaches.”

Assistant Coach Liam Klein painted the picture of what Fifth-Third Bank Stadium will look like lined for football. It is a sight that Kennesaw State fans have been aching to 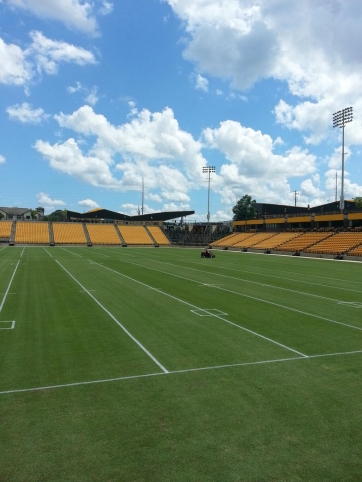 Thanks you Coach Klein for sparking that imagination that will soon, but not soon enough, be a reality, football at Kennesaw State!

Posted on July 9, 2013, in Uncategorized. Bookmark the permalink. 1 Comment.