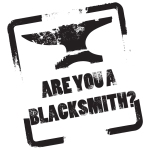 Kennesaw State University is exploding and the potential for the student body to make the experience of being a part of Owl Nation is a special one and it is real. But it won’t happen unless some students are willing to lead and be Blacksmiths. What is a Blacksmith, you ask?

black·smith
ˈblakˌsmiTH/
noun
a skilled craftsman who makes and repairs things in iron by calculated strikes with a hammer
The Kennesaw State student section has been empty at basketball games the past several years, and I don’t blame them. The Owls basketball team has not had many wins over the past four years and that will effect the amount of time and dedication students will spend cheering on the team. However, this is a new season. Not just for basketball, but for Kennesaw State as a whole. Football is coming in less than 11 months. The students will be a large contingent at Fifth-Third Bank Stadium come game day and it will be special. But the question will be will the fan base fizzle. That is why you need Blacksmiths. You need those who put in the work to establish an atmosphere created by the students that will endure wins and losses, victories and adversities. There are a number of college football teams that struggle with attendance, but does it affect their home-field advantage? Should wins and losses dictate when you show up and cheer? Below is the attendance numbers for NCAA Division-I FCS programs for 2013.

The top school in football attendance was football teams in the Football Championship Series was Appalachian State who posted a 2-4 home record last year. Appalachian State’s cumulative attendance and per game average attendance for the regular season dominated FCS. Attendance routinely exceeded 130% of seated stadium capacity, according to Stadiumjourney.com (You can read all bout the Appalachian State’s Kidd Brewer Stadium here: http://www.stadiumjourney.com/stadiums/kidd-brewer-stadium-s1848). The Mountaineers made the jump from FCS into the FBS and the Sun Belt Conference where they are sure to continue to have a raucous fan base. The fans are the reason it has become such an iconic college football experience for the Mountaineer fan base and the student body is a main reason.

On the flip side there is the Duquense Dukes who had the lowest attendance of any FCS school last year. The first question to ponder is why would the attendance be low. Stadium size is a huge factor. Duquense’s Arthur J. Rooney Stadium seats just 4,500 fans.  The average attendance in 2013 was 2, 133. The stadium went more than half empty as the Dukes went 5-0 at home. The enrollment for Duquense is nearly 10,ooo students, so there are several students missing out. I give a tip of my hat to those who do show up.
Fifth-Third Bank seats 8,300 and will surely be filled for Kennesaw State Owl football, in the beginning. But as a start-up program, there are going to be peaks and valleys. What kind of student section will Kennesaw State have? If the basketball season is any indication it doesn’t bode well. Again, the call is put out for Blacksmiths. It has to begin now. Who will be the leaders creating an exciting and profound atmosphere at Kennesaw State? Who will define what it is like for an opposing team to come into a Kennesaw State sporting event? It will be those students who are willing to work at forging something great out of the raw material given to them. It will take those students who rally for the team when they are down. It will be the fans who say, “we’ll get them next time,” after a loss. It will take passion, spirit and creativity. It will take more

than one hard core student like the original Blacksmith, Kyle Odom. Kyle is the president of the Black & Gold club, a student-run organization that raises money to offset cost for student athletes scholarships, capital improvements and operating budget. He travels to as many away games as he can afford and is there in his “Tradition Begins Here” t-shirt cheering, win or lose. Even if he is the only one. Kyle Odom is a Blacksmith. But what Kennesaw State needs can not be done by one passionate fan. It takes a significant group of fans to make attending a Kennesaw State sporting event a tradition that everyone buys into. This transition cannot happen overnight, but it can happen with the help of a few Blacksmiths for Kennesaw State. Are You A Blacksmith?
To find out more about how to join the Black & Gold, visit: https://www.facebook.com/KSUBlackandGold

I am honored to be the play-by-play broadcaster for a NCAA Division-I university. I learned to enjoy soccer back in 1999 as the United States Women’s National Soccer Team

dramatically advanced through the FIFA World Cup. Who can forget the Penalty Kick by Brandy Chastain to win it? I was a soccer fan, but not a player or coach, so a lot of the detail and jargon I am familiar with in other sports wasn’t natural to me. When asked to voice the soccer matches,  the first thing I did was read the rule book. Each and every year, I spend time with this little blue book and get familiarized with the rules and procedures.

Next, I watch as much soccer as I can to listen to how the game is called on a professional level. Now, of course I don’t have a cool British accents that legitimize broadcasters immediately, so I better know and understand the game. Listening to great soccer commentators allows me to familiarize myself with the jargon used and the spirit in which a broadcast called. Below are the top soccer commentators according to worldsoccertalk.com.

While Darke has been working Premier League matches since the 90’s, he has been a fan favorite here in America ever since he starting doing matches with ESPN in 2010.  Darke possesses an outstanding sports voice, and perhaps his best known call was Landon Donovan’s goal against Algeria in the 2010 World Cup (not to mention his hilarious commentary of a blind date for an ESPN commercial).  Premier League fans can now hear Darke on BT Sport in England and the occasional broadcast on ESPN.

One of the most recognizable voices in the box, Tyler is in the upper echelon when it comes to soccer commentators.  Tyler has a number of memorable calls through the years and FIFA video game fans surely have his voice branded into their brains.  The 68-year-old Chester native was voted as the Premier League Commentator of the Decade by fans in 2003.

After listening to these brilliant commentators, you must understand the concept of elevating energy at the right time. In soccer, the game is 95 percent describing passes and changes in possession. Not exactly exciting stuff, but when the moment happens, that beautiful orb finds the back of the net, you must be able to provide the appropriate amount of energy.

With every broadcast, there are distinct differences in an audio only broadcast or televised broadcast. In soccer, the most important element in a radio broadcast is spotting the ball and identifying who has possession. This can be extremely challenging at varying levels. At the collegiate level, possession can change rapidly and it is nearly impossible to comment on every touch of the ball. But, you should be able to identify what team comes away with a loose ball. It is also helpful to use the the direction and left or right of the player, “Reed passes right to Hepsoe, who advaces the ball past the halfway line, Hepsoe feeds it left back to Hughes who moves to the left wing, she sends a cross to Gaughn in the 18…..” Using spots on the field as landmarks will help the listener place the ball in their mind. Below is a Diagram I use to help place and describe the possession. 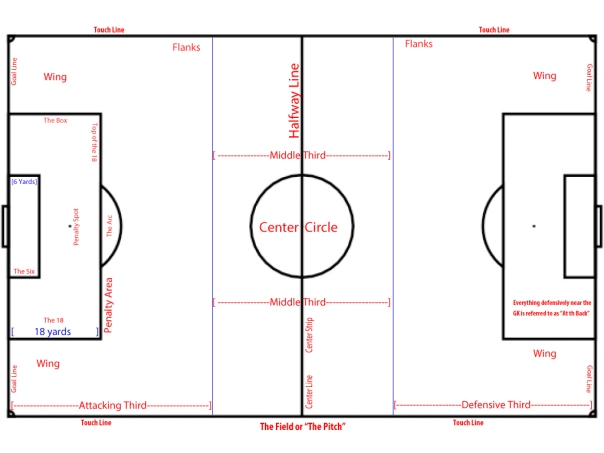 I take this in the booth with me on each broadcast. I also write on the diagram with a blue pen in case something happens during the match I want to refer back to during intermission or post game.

A television broadcast is very different, but equally as challenging. One of the most difficult aspects is identifying the players on the opposing team. A perfect example is a recent match between Kennesaw State and Furman. Since I am familiar with the KSU players, I focused on recognizing the Furman players. From the front, I could recognize numbers and from studying the rosters, I was able to identify the player, but from the back…well see for yourself.

From the press box, I found it nearly impossible to see the Furman’s uniform numbers. I began to recognize the players by their appearance, but that wasn’t until late in the first half. In this instance it was a radio broadcast and I didn’t have time during the gameplay to peer down at my spotting board, so I did the best I could. If  it were a televised broadcast, I would have used my spotting chart a lot more. With the televised broadcast it helps when you do not have to describe every detail of the match. You have more time to use the spotting board. It is even better when you have a color analyst to help you out.

Of course preparation is still very important. You can never over prepare, but you certainly can under prepare. As a broadcaster, you are there to tell the stories associated with the teams, individual players, coaches, etc. Preparation will give you the necessary outlook to know the teams history, but there is nothing like speaking to the Sports Information Director and the head coach for inside information about the competing teams. Do your prep and talk to the folks available and you will be fully prepared for a spirited broadcast.

Kennesaw State Football: 365 and Counting Down to Kickoff

In 365 days the Kennesaw State Owls football team will take the field in Johnson City, Tennessee to face Southern Conference newcomer East Tennessee State University. Owl Nation can now literally count down the days, hours, and seconds to when toe meets leather. The Kennesaw State football team has everything they need in place to prepare for the upcoming season. Head Coach Brian Bohannon was hired away from Georgia Tech and mentor Paul Johnson to take on the challenge establishing a new program. The coaching staff assembled by Coach Bohannon are veteran coaches and focused many hours of their lives to recruiting. The Black & Gold had their first signing day and brought in 29 players, including Atlanta Journal & Constitution’s All-Classification Player of the Year, Jaquez Parks from Griffin High School. Parks was just one of many really talented athletes to choose Kennesaw State. With the addition of  walk-ons and transfers, the Owls roster is now boasts 92 football players. With under a year to go, it is time for the first in-depth analysis of the Kennesaw State roster. We start with the offense and the signal callers. 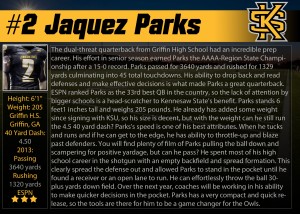 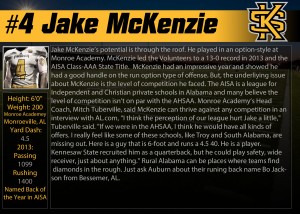 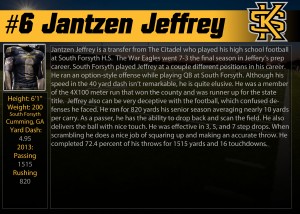 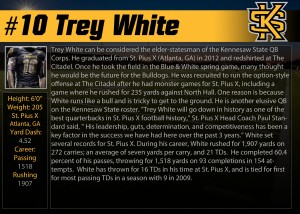